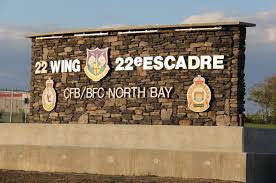 Canadian Forces Base North Bay, also CFB North Bay, is an air force base located at the City of North Bay, Ontario about 350 km (220 mi) north of Toronto. The base is subordinate to 1 Canadian Air Division, Winnipeg, Manitoba, and is the center for North American Aerospace Defense Command (NORAD) operations in Canada, under the Canadian NORAD Region Headquarters, also in Winnipeg. It is also home to the 1 Air Force, Detachment 2 of the United States Air Force.

22 Wing/Canadian Forces Base North Bay is the most important military base in Canada with respect to the continental air defense of North America and the country’s air sovereignty. It is also home to one of the most unusual military installations in North America, the NORAD Underground Complex, a bunker the size of a shopping center, 60 storeys beneath the surface of the Earth.

On 1 April 1993, all air bases in Canada were redesignated as wings; the base was renamed 22 Wing/Canadian Forces Base North Bay. This is abbreviated as 22 Wing/CFB North Bay. Today, although this designation still stands, the base is often referred to simply as “22 Wing”, and the Base Commander as the “Wing Commander”.

North Bay’s air force base is the centre for the air defence of the entire country, and works in concert with the United States via NORAD for the air defence of Canada-U.S. portion of the North American continent. Activities are wide ranging, from identifying and monitoring all aircraft entering Canada from overseas, to guarding VIPs flying in the country (e.g., the Pope), to assisting aircraft suffering airborne emergencies, to aiding law enforcement versus smugglers, to participating in NORAD’s Christmas Eve Tracking of Santa Claus for children. From the mid-1970s to the mid-1990s it took in Unidentified Flying Object reports from across the country on behalf of the National Research Council of Canada, relaying the reports to a study at the Herzberg Institute of Astrophysics, British Columbia. In 2000, it resumed UFO reporting, provided to researcher Chris Rutkowski at the University of Manitoba.

In 2010, North Bay’s operations center took the first steps towards transitioning from air to aerospace defense, commencing preparations for SAPPHIRE, Canada’s first military satellite.  SAPPHIRE will function as a contributing sensor in the United States Space Surveillance Network (SSN), performing surveillance of objects orbiting at 6,000 to 40,000 kilometers altitude, and delivering data on those objects (called Resident Space Objects, or RSOs) to the Space Surveillance Operations Center (SSOC), in North Bay’s operations center. The SSOC, in turn, will coordinate with the Joint Space Operations Center, in Vandenberg, California. On 25 February 2013, SAPPHIRE was launched from a site in India, and is undergoing technical testing and checks, expected to begin its duties in July 2013.

22 Wing/CFB North Bay has two unique properties among air bases in Canada. It is the only Canadian air base that does not have flying units (as of August 1992, when the last flying squadron departed), and the only air base in the country that does not have an airfield (base assets such as control tower, fuel depot and hangars were demolished or sold following the 1992 departure).

The site of North Bay was on the main canoe route west from Montreal (see Canadian Canoe Routes (early)). Apart from First Nations tribes, voyageurs and surveyors, there was little activity in the Lake Nipissing area until the arrival of the Canadian Pacific Railway in 1882. The CPR started its westward expansion from Callander Station (later renamed Bonfield), Ontario; Bonfield was inducted into Canadian Railway Hall of Fame in 2002 as the CPR First Spike location.

That was the point where the Canada Central Railway extension ended. The CCR was owned by Duncan McIntyre who amalgamated it with the CPR and became one of the handful of officers of the newly formed CPR. The CCR started in Brockville and extended to Pembroke. It then followed a westward route along the Ottawa River passing through places like Cobden, Deux-Rivières, and eventually to Mattawa at the confluence of the Mattawa and Ottawa Rivers. It then proceeded cross-country towards its final destination, Bonfield. Duncan McIntyre and his contractor James Worthington piloted the CCR expansion. Worthington continued on as the construction superintendent for the CPR past Bonfield. He remained with the CPR for about a year until he left the company. McIntyre was uncle to John Ferguson who staked out future North Bay after getting assurance from his uncle and Worthington that it would be the divisional and a location of some importance.

In 1882, John Ferguson decided that the north bay of Lake Nipissing was a promising spot for settlement. That year, the North Bay Police Service was also established. North Bay was incorporated as a town in 1891. The first mayor was John Bourke. More importantly, Bourke developed the western portion of North Bay after purchasing the interest of the Murray Brothers from Pembroke, who were large landholders in the new community. The land west of Klock Avenue (Algonquin Avenue) was known as the Murray block. Bourke Street is named after John Bourke. Murray Street is named after the Murrays.

Cementing North Bay’s status as a railway town, it was selected as the southern terminus of the Temiskaming and Northern Ontario Railway (T&NO) in 1902 when the Rossgovernment took the bold move to establish a development road to serve the Haileybury settlement. During construction of the T&NO, silver was discovered at Cobalt and started a mining frenzy in the northern part of the province that continued for many years. The Canadian Northern Railway was subsequently built to the town in 1913.

The Georgian Bay Canal was a mammoth transportation system that proposed to connect the Great Lakes with the Atlantic Ocean. The entire passageway from the Ottawa River to Lake Nipissing and down the French River to Georgian Bay was surveyed, mapped and ready to go in the first decade of the 20th century. Financing became the giant hurdle and as time passed, transportation patterns changed and interfered with the earlier practicality of the giant venture. Despite this, there were groups who still hoped it would happen as late as 1930.

North Bay grew through a strong lumbering sector, mining and the three railways in the early days. The town benefited from strong community leadership and people like Richardson, Milne, McNamara, Englands, Browning, McDougal, Carruthers, McGaughey, George W. Lee, Senator Gordon, T. J. Patton, Charlie Harrison, and many others are responsible for its development. In 1919, John Ferguson was elected mayor of North Bay and continued to serve as mayor until 1922. North Bay was incorporated as a city in August 1925.

North Bay is a caring community of energetic, high-spirited people. Festivals, attractions and a wide range of special event activities blend with the natural attractions of the area. The combination of lush forests, spring-fed water and clean air creates a healthy environment for working, living and raising a family. Safe, friendly, well-planned neighborhoods also make coming home a pleasure in North Bay.

If you are looking for farm fresh produce and plants, homemade preserves and fresh baked goods as well as handmade crafts and local artwork, the North Bay Farmers’ Market is the place to be!  Starting the May long weekend to Thanksgiving weekend, rain or shine, the market is open Saturdays between 8:30am and 1:00pm and Wednesdays between 12:00pm and 5:00pm.  Visit the North Bay Farmers’ Market website for vendor details, locations and parking options.

Situated between Lake Nipissing and Trout Lake, the City offers lakefront property in both urban and rural settings. The short distance between home and work allows more time to enjoy the wealth of parkland and leisure facilities.

Housing in North Bay offers a variety of options depending on whether you prefer the urban or rural location. Country settings are available within minutes of the downtown core and provide an array of attractive living alternatives.

A variety of recreation opportunities exist in the community provided by the natural environment trails for walking, biking, or hiking, as well as, those programs and services offered by the municipality and other community service providers. Activities for all seasons including: beaches, a municipal marina, golf, arenas, skiing and snowmobiling.