are the homes of the operational and support units of the Canadian Forces. A base must be designated by the Minister of National Defense. Although a base may be an army garrison or an air force wing, it is still defined as a base. There are also Canadian Forces Stations, which are smaller than bases and are operationally oriented, usually without any support capability. Each base or station is responsible to a command, depending on its designation as army, navy or air force. In addition, there are Forward Operating Locations (FOLs), unmanned airstrips in Canada’s north which house reserves of aviation fuel for emergency use, and radar sites, minimally manned or unmanned sites stretching across northern Canada. 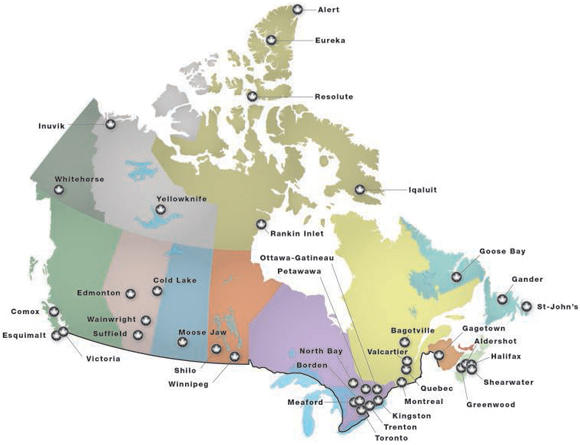 There are 47 unmanned and 36 manned radar sites maintained along the North Warning System (NWS), formerly called the Defence Early Warning (DEW) and Pine Tree lines, across the north from Inuvik to Bagotville. They are supported by 5 Logistics Support sites (LSS).

Canada has two military college campuses, Royal Military College of Canada (RMC) at Kingston, Ont, and Royal Military College Saint-Jean (RMC Saint-Jean) at St-Jean-sur-Richelieu, Qué. There are reserve units in every major city, and most smaller ones, in Canada. Forwarding Operating Locations are situated in Inuvik, NWT, and Rankin Inlet and Iqaluit, Nunavut.