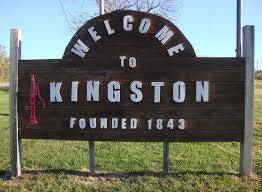 The base has a great Military Family Resource Center that offers a range of programs tailored to our community needs; first class Sport and Recreation facilities, and numerous clubs and activity groups that are sure to give you an opportunity to seek out new hobbies, interests and friendships.

The Barriefield Military Camp, commonly called Camp Barriefield, was established as a military base at the outbreak of the First World War in 1914 on the east bank of the Cataraqui River opposite the city of Kingston in the village of Barriefield. Located north of King’s Highway 2, the name of the military base and village was in honour of the Royal Navy’s Rear-Admiral Sir Robert Barrie who served during the War of 1812.

In 1937 the base expanded to the south side of King’s Highway 2 with the opening of the Vimy Barracks, named in honour of the Battle of Vimy Ridge. The Vimy Barracks became home to the Royal Canadian Corps of Signalswhich relocated to the Barriefield Military Camp from the Borden Military Camp. The Signal Training Centre, later renamed the Royal Canadian School of Signals was also established at the base.

The Barriefield Military Camp continued to expand as one of Canada’s largest training bases when the Royal Canadian Ordnance Corps established a training centre during the Second World War. Following the war, the original part of Barriefield Military Camp on the north side of the King’s Highway 2 was renamed the McNaughton Barracks in honour of the Canadian Army’s General A.G.L. McNaughton who served during the First and Second World Wars. From 1945-1969 the McNaughton Barracks were host to the Royal Canadian Electrical and Mechanical Engineers School.

The base was renamed to Canadian Forces Base Kingston (CFB Kingston) in 1966 in the lead-up to the February 1968 unification of the Canadian Army, Royal Canadian Navy and Royal Canadian Air Force to form theCanadian Armed Forces. CFB Kingston was placed under Training Command and was responsible for providing a training facilities and support services to its integral units and lodger units.

In September 1975, Training Command was disbanded and the base was transferred to Canadian Forces Training System. The Royal Military College of Canada, the National Defence College, the Canadian Land Force Command and Staff College and the Canadian Forces School of Communications and Electronics were some of the units supported by the base and under the authority of the commander of CFB Kingston. On September 1, 1988, the 1st Canadian Division Headquarters was established to serve as a staging base for the deployment of troops and materiel on active operations; in this role it supported Operation Friction which was Canada’s support to the United Nations for the Persian Gulf War in 1991.

On March 30, 1995, responsibility for CFB Kingston was transferred to Land Force Command, now known as the Canadian Army (since August 2011).

On June 26, 1997, Air Command reorganized by disbanding the 10 Tactical Air Group and replacing this unit with the newly formed 1 Wing. The headquarters for 1 Wing was relocated to CFB Kingston, however, the unit’s 6 tactical helicopter squadrons flying the CH-146 Griffon were spread out at Canadian Forces bases across the country.

Kingston is a Canadian city located in Eastern Ontario where the St. Lawrence River flows out of Lake Ontario.

Growing European exploration in the 17th century and the desire for the Europeans to establish a presence close to local Native occupants to control trade led to the founding of a French trading post known as Fort Frontenac in 1673. The fort became a focus for settlement.

Located midway between Toronto and Montreal, Kingston was named the first capital of the Province of Canada on February 15, 1841, by Governor Lord Sydenham.  While its time as a political center was short, Kingston has remained an important military installation.

Kingston is nicknamed the “Limestone City” because of the many heritage buildings constructed using local limestone.

During the War of 1812, Kingston was the base for the Lake Ontario division of the Great Lakes British naval fleet, which engaged in a vigorous arms race with the American fleet based atSackets Harbor, New York for control of Lake Ontario. The Provincial Marine quickly placed ships into service, troops were brought in and defences were built, including fortifications on Point Henry and Point Frederick, and blockhouses to the north and west of Kingston.

In the 1840s, the Upper Canadian government built Fort Henry and a series of distinctive Martello towers to guard the entrance to the Rideau Canal. All still exist, and Fort Henry is a popular tourist attraction.

Kingston’s location at the Rideau Canal entrance to Lake Ontario, after canal construction was completed in 1832, made it the primary military and economic centre of Upper Canada. Incorporated as a town in 1838, the first mayor of Kingston was Thomas Kirkpatrick. Kingston had the largest population of any center in Upper Canada until the 1840s. Kingston was incorporated as a city in 1846.

Kingston was chosen as the first capital of the united Canada’s and served in that role from 1841 to 1844. The first meeting of the Parliament of the United Canada’s on June 13, 1841, was held on the site of what is now Kingston General Hospital. The city was considered too small and lacking in amenities, however, and its location made it vulnerable to American attack. Consequently, the capital was moved to alternating locations in Montreal and Toronto, and then later to Ottawa in 1857. Subsequently, Kingston’s growth slowed considerably and its national importance declined.

Select your Province and then the Base to which you are posted to find your Local IRP Military Relocation Expert.  Having someone who is familiar with Relocation Requirements and Local Market Conditions can make your move less STRESSFUL!