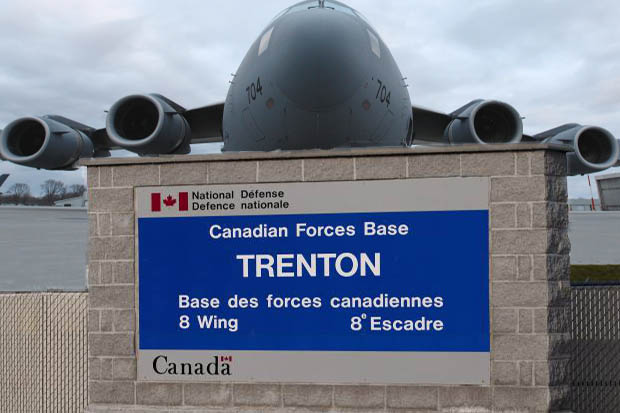 Canadian Forces Base Trenton  (aka CFB Trenton), is a Canadian Forces flying base located 2.6 miles northeast of Trenton, Ontario. It is operated as an air force base by the Royal Canadian Air Force (RCAF) and is the hub for air transport operations in Canada and abroad. Its primary RCAF lodger unit is 8 Wing, commonly referred to as 8 Wing Trenton.

The airport is classified as an airport of entry by NAV CANADA and is staffed by the Canada Border Services Agency. The use of the airport for civilian aircraft is permitted for emergencies or MEDEVACs only.

In 1929, 960 acres (390 ha) of farmland near Trenton were purchased by the federal government to establish a Royal Canadian Air Force (RCAF) station to be called RCAF Station Trenton. The base was officially opened in August 1931. Lord Bessborough, the Governor General in 1931, laid the commemorative cornerstone of the airbase, which had the motto, “Per Ardua ad Rem,” or “Through Adversity to the Good” . This motto was the long-standing unspoken motto of the airmen of CFB Trenton.  Trenton was intended as a smaller supporting base to RCAF Station Borden, which was the home of Canadian military aviation and a major training base at the time. By June 1937 it had replaced Camp Borden as the primary flying training center; the older station was given over increasingly to technical and trades training. The location of CFB Trenton was chosen for being the midpoint between Ottawa and Toronto. It also provided the possibility of using the facility for seaplanes operating on Lake Ontario.

No. 1 Fighter and No. 3 Army Cooperation Flights, flying Siskin and Tiger Moth aircraft, were the first air elements to be hosted at Trenton. Trenton became a major training centre during the Second World War under Canada’s participation in the British Commonwealth Air Training Plan. Schools included the RCAF Central Flying School, No. 1 Air Navigation School (to 1942), No. 1 Flying Instructor School, and No. 1 Composite Training School.  Along with the trainees, the 6 Repair Depot was based at Trenton. Following the war, Trenton became home to transport and fighter aircraft, with transport aircraft from the base taking part in the Korean Airlift, as well as numerous other missions throughout the 1950s and 1960s.

Canada upgraded its transport and search and rescue fleets during the 1960s when the RCAF purchased the CC-137 Husky, CC-130 Hercules, CH-113 Labrador and CC-115 Buffaloaircraft. RCAF Station Trenton became the home of training facilities for these aircraft.

RCAF Station Trenton was renamed Canadian Forces Base (CFB) Trenton after the February 1, 1968 merger of the RCAF with the Royal Canadian Navy and Canadian Army to form the Canadian Forces.

CFB Trenton has several recognized and classified Federal Heritage buildings on the Register of the Government of Canada Heritage Buildings.

From delivering supplies to the high Arctic to airlifting troops, equipment and humanitarian loads worldwide, 8 Wing/CFB Trenton is the hub of air mobility operations in Canada. 8 Wing is responsible for Search and Rescue (SAR) operations over a large area under the jurisdiction of the Joint Rescue Coordination Centre (JRCC) Trenton. CFBTrenton is home to the famous Skyhawks; this parachute demonstration team is a sub-unit of the Canadian Army Advanced Warfare Center (CAAWC).

Originally founded in 1984 as the RCAF Memorial Library and Museum, the National Air Force Museum of Canada (NAFMC) has developed and expanded to where it now enjoys a national reputation, the largest number of aircraft on static display and the most skilled team of restoration volunteers of any military museum in the country.

Relocated in 1994 to the former curling rink on RCAF Rd, 8 Wing/Canadian Forces Base Trenton, the museum presents more than 3,500 artifacts and memorabilia depicting major historical events, notable aviation achievements, as well as the social history of Canada’s Air Force.

Two subsequent building expansions, the Rotary Restoration Shop in 1996 and in 2005, an additional 7,000 m2 of display space, evolved around the acquisition and restoration of one of the most versatile Bombers of the Second World War Bomber, the Handley Page Halifax. With the interior of the expansion building near completion, the NAFMC continues to refine and reorganize the collection in anticipation of the installation of the new permanent exhibits.