As an experienced realtor, assisting clients in both buying and selling houses; I am determined and committed to servicing your real estate needs. My self-motivation and organizational skills come from a desire to provide excellent service in order to exceed expectations. My personal goal in real estate is to obtain the highest level of satisfaction from all of my clients.

Call Angela Ford-McKinnon for any information regarding Selling or Buying a home when posted.  780-842-0002 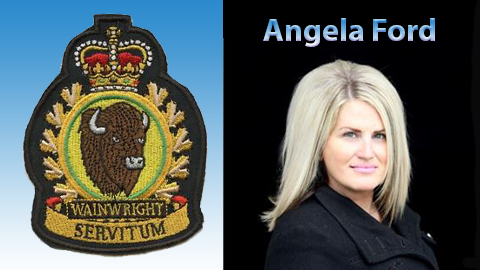 Wainwright is a town on the prairies of east-central Alberta, Canada.

It is located on the north side of the Canadian National Railway, with CFB Wainwright (Denwood) located on the southwest side. The town lies 61 kilometers (38 mi) south of Vermilion, in the Battle River valley, along Highway 41, called the Buffalo Trail. The town was originally named Denwood, but was later relocated by the Grand Trunk Pacific Railway 5 kilometers (3.1 mi) west-northwest and renamed after General William Wainwright, the second vice-president of GTPR.

Wainwright has the third-largest stampede in Canada. It occurs at the end of June, and includes a rodeo, chuck wagon races, parade, midway, and an agricultural fair.

The 583 km2 (225 sq mi) Buffalo National Park was closed in 1940 and the property leased by the Government of Alberta to the Department of National Defence (DND) for the creation of an ammunition storage facility as well as an army training camp. DND owned an adjacent 75 km2 (29 sq mi) property and used the facility for live-fire artillery, armored and infantry training.

Called Wainwright Military Camp, or just Camp Wainwright, after the nearby Canadian National Railways division point, the facility saw use from January 29, 1945, to May 24, 1946, as a prisoner of war (POW) internment camp for 523 captured German officers, soldiers and civilians from its first day of operation to 1,100 POW’s at its peak. During the 16 months the POW camp was in full operation, only two prisoners made a successful escape, although they were recaptured just over a month later, but not until they had reached Gary, Indiana.

Decommissioned as a POW internment camp in 1946, Camp Wainwright reverted to a Canadian Army training facility. The camp staff and guard company were reduced to nil strength a few weeks later, marking the end of this chapter of CFB/ASU Wainwright’s history. Wainwright’s infrastructure expanded significantly during the Korean War as buildings were constructed to house and train soldiers in three Canadian Army battalions, as well as units that would form British Commonwealth Forces Korea such as the 25th Canadian Infantry Brigade.

The February 1, 1968 merger of the Canadian Army, Royal Canadian Navy and Royal Canadian Air Force to form the Canadian Forces was predated by a number of major changes to Canada’s military structure. One of these saw Camp Wainwright transferred on January 1, 1967, to become an auxiliary satellite training camp of CFB Calgary. This was reverted on August 1, 1967, due to command and control problems, and Camp Wainwright became Canadian Forces Base Wainwright (CFB Wainwright) as a separate entity within the establishment of CFB Calgary.

An airfield was opened at CFB Wainwright in October 1967 and at the time of official unification, CFB Wainwright became a component of Training Command as the facility was tasked as a training area. CFB Wainwright offered both officer and basic training courses, battalion-level unit operations and acted as a host for training foreign detachments. Wainwright also offered administrative support services for 1 Canadian Brigade Group units.

Subsequent changes to the force structure saw Wainwright’s role as a training facility evolve, particularly as the garrisons at CFB Calgary and CFB Edmonton shifted some of their training to the newly established and much larger CFB Suffield.

In 1983, CFB Wainwright consisted of the training facilities, the 742 Communication Detachment and a British Army liaison detachment.

Defence cuts following the end of the Cold War during the 1990’s resulted in the closure of CFB Calgary and consolidation of units at CFB Edmonton. CFB Wainwright was also impacted by defense cuts and was reduced to an Area Support Unit (ASU). ASU Wainwright, as the facility is also called, has 690 military personnel and 300 civilian workers. As part of 1 Area Support Group (ASG), it hosts the Land Force Western Area Training Center (LFWATC) and the Canadian Manoeuvre Training Center (CMTC), as well as the following units:

The transient military population averages over 1,000 personnel at any given time, and in the summer it grows significantly when hundreds of primary reservists undertake annual training. As of 2009 it is the main training base of the 1 Canadian Mechanized Brigade Group, including Princess Patricia’s Canadian Light Infantry (PPCLI), and covers an area of 609 km2 (235 sq mi), which includes 25 weapons ranges. Although primarily a training base for the Canadian Army it is also used by the Royal Canadian Air Force to train fighter bombers and search and rescue practice.  The base also includes Wainwright/Wainwright (Field 21) Airport (52°49′50″N 111°06′02″W) located 9 nautical miles (17 km; 10 mi) west of Wainwright, approximately 7 NM (13 km; 8.1 mi) west of CFB Wainright, with a 7,349-foot (2.240 km) asphalt runway.